I’ve been letting the girls go up front to church for the “Children’s Sermon” for quiet some time now.  Usually they sit there quietly and look out at the sea of faces looking back at them and they seem to listen, somewhat, to Chad or Jeff…

But this Sunday, in response to Jeff’s question: “What do you plant in your garden?” Nora exclaimed “FLOWERS!”

I think Jeff was as shocked as we were.  I was so proud.  What a participant.

Granny Cozine we pay for essay writing are THINKING of you today and sending all our warm wishes of comfort and health and strength YOUR way today!

We are ready to put this winter behind us…

It’s been a long, cold one… 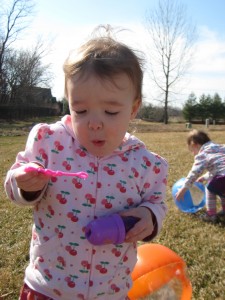 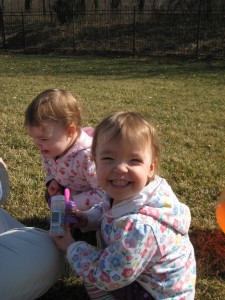 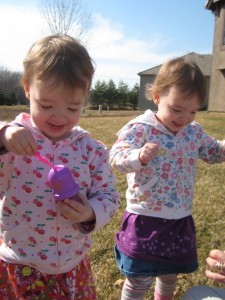 A now a song from the boss ladies…

Well, we kinda felloff the blogosphere at the end of 2008, but with good reason.  A huge project consumed my life for the better of 8 weeks through October and November and for the last three weeks we’ve rotated through a puking spell that has left all of us completely exhausted.  Such is life now, but we’re determined to rebound and embrace 2009 with better health and more comedy than ever before.

December has brought so many changes to our lives, including using the potties like BIG girls and shedding our addiction to the highchairs.  The transition to toddler beds will happen in the next few months, and who knows what else is in store.  We talk a mile a minute.  Play silly games.  And comfort each other when we are not feeling so good.  It’s really a sweet time.

This stomach virus has consumed most of our December and while it’s been tough on our little bodies, the girls have been so sweet to each other.  They will rub each other’s backs and help get water and blankets for the other.  Of course, if you’re not the one who is sick, it sometimes makes you feel left out so you concoct ideas about “fake vomiting” and start screaming from your bed “I GROW UP, TOO! [supposed to be “throw up”] I GROW UP, TOO!”; followed by pathetic attempts at throw-up sounds.  The first night that Tess got sick it was about 2:00a.m. and Chad and I rushed in their room to help her, and it scared Nora, understandably.  She wanted to get out of her crib so we let her out and while we were stumbling around still half-sleep trying to clean up the child and the room in the dark Nora helped out by flipping on the light switch and announced cheerfully, “TIME TO GET UP EVERYBODY!”.  Uh, no.  I thought Chad was going to tackle her.

Tessa does not like to be sick.  It is so sad to see a baby so limp and zoned out.  Nora seems to push through it a little better and so we have a hard time telling when Nora is really feeling sick or just doesn’t want to be left out of the fun (hence the “car cleaning incident of ’08”).  But Tess will let you know when her tummy hurts and when she’s not feeling well.  They have been so good at communicating, it has really changed our life to be able to understand their needs.  Of course, such verbalization comes with clear opinions and a fiery independence.  “ME do it!”, they’ll say.  Ok, ok, if you want to cook your own eggs–then have at it.  Nora has demanded that SHE drive the car somedays.  Uhhh, no.  But they are great helpers.  In fact, they refuse to sit down at the table until every piece of silverware, every napkin, cup and plate is ready and in place.  They have little stepstools now so they can see the action and help us get out meals ready.  It’s been really fun to have them as my little sous chefs.

This is what we’ve been doing right after our nightly bath when we’re getting ready for bed:

We have A LOT of books.  I get a lot of them at garage sales on the cheap.  The girls have always loved to read them.  And even though we have tons of books–it feels like we read the same ones over and over.  We have them all memorized.

When I read to the girls, and when the girls want to listen to me read, they sit quietly on my lap.  Sometimes I prompt them to end the sentence or I ask them questions, but mostly they just listen.

More often lately, however, I think they’re hardly paying attention to me when I’m reading.  They dilly-dally and squirm and tickle each other.  So, I get frustrated and just stop reading as I struggle to see the words and they seem to be uninterested.  Of course when I stop they protest.  But I have found that when THEY read the book themselves, they can really recite a lot of the lines themselves.  It’s really quite amazing and does something for one’s ego when it appears that your 2-year-old child can sit down and read an entire book.  So, I’m pretty sure they are paying attention when I read, sometimes it just doesn’t feel like it.

So, you might imagine my surprise when Nora sat down on the living room floor yesterday, plucked a book entitled “Hanukkah” from her book bin and, somewhat ironically, broke out into a toddler version of “Jesus Loves Me”.

From the other room: “[grunt] [quiet whine]” Quiet, but persistent.

I look over at Chad.  Still to the world.

I go into their room, look over at Nora.  Still.  Look over at Tessa, her eyes half open.  I reach down to touch her.

I clean her up.  New diaper.  New jammies.  Entire set of new bedding.  She is so still and quiet and helpful.  A dry kiss goodnight.

Then, I hear singing, “Baby on da bus go ‘wah wah wah’ ALL through da TOWN!”

An early morning serenade from a wet, little cutie.

We were so lucky to have Granny Cozine stay with Grammy Gwen during the summer while she transitioned to Minnesota.Â  The girls loved to go over to Grammy’s house to see Granny Cozine.Â  We kept trying to get the girls to say, “Granny Cozine”, but they just kept calling her “Cozine!”

Then the questions would start:

Grammy pulls out some pie and ice cream for dessert and the girls randomly break into a rendition of “Happy BIR-DAY, CO-Zineeeeee! Happy BIR-DAY to Uuuuuu!”

We miss Cozine, although we’re happy that she’s finding a new home in Minnesota.Â  The other night, out of nowhere, Nora asked, “Cozine go?”Â  We can’t wait for our first visit.

The Great Adventures of Nora and Tessa